Representatives from Duolingo and Duolingo English Test, along with education strategist and head of Education Rethink Anna Esaki-Smith, authored Lowering Barriers to Education in a time where international higher education is facing “increasingly contradictory demands”.

“[Operators want] the provision of pro-bono pathways to higher education qualifications as the number of refugees and the displaced hit record-high levels across the globe, while at the same time recouping significant financial losses incurred due to the pandemic,” Esaki-Smith said, speaking to The PIE News.

“The challenges higher education must address are unprecedented. So, it’s safe to assume solutions will need to be innovative and collaborative on that same scale,” she further explained.

The report says that while the universities emerge from “being fully virtual”, they will retain some digital strategies and tools they have already developed – and the benefits, it insists, are “myriad”, due to factors like cost-effectiveness and virtual assessment and recruitment models – according to Duolingo, a “new prototype has emerged”.

“Using machines and humans in ways they both perform best lowers expenses associated with certain tasks, such as developing test items, which have traditionally been done by humans at a high cost. Final decisions, however, are always left to our experts,” Lindsay Addington, co-author and Duolingo senior strategic engagement executive, told The PIE.

The report highlighted that resistance to the use of technology in higher education, and, across the board, was “effectively eliminated”, and allowed for both educational and technological providers to “continue exploring alternatives to in-person learning”.

This shows, with edtech investment at its highest ever, and growing at an even higher rate: globally, the report refers to HolonIQ data that it reached over $20bn in 2021 – the US almost quadrupled its rate from $2.5bn to $8.3bn between 2020-21. 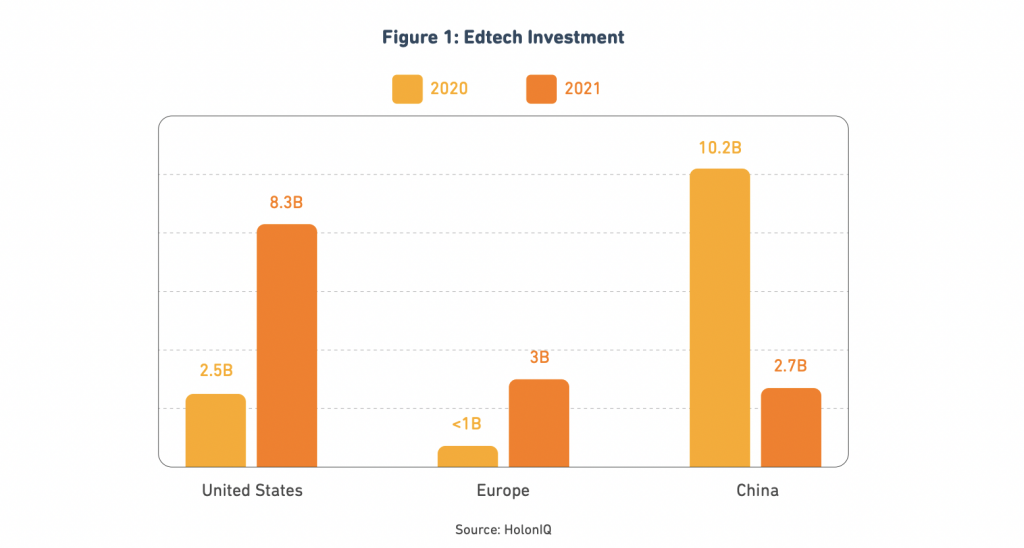 Addington also pointed out that, while such innovations were already being offered in the classroom to students currently enrolled in universities, there was an opportunity to do more.

“This new paradigm, education through edtech, has the potential to reach a more diverse and historically underserved student population by lowering costs, removing geographic barriers, and offering more flexible timetables.

“Developing new university partnerships – for example, transfer agreements with University of the People – and identifying funding models for scholarships will ensure the university graduates of the future will be even more diverse than those today,” Addington added.

While the opportunities are there, the report concludes that it is not only technology that needs to continue to innovate if the partnership between education and technology is to move forward – tech alone is “not enough”.

“The goodwill and efforts of individuals and universities are necessary to create sector-level buy-in,” the report declared.

“We all need to do our part at a grassroots level, whether it be finding funding for a single scholarship to a student in need, or offering an online course to a wider, more diverse group of learners,” it added.

Esaki-Smith concurred, saying that the current traditional forms of face-to-face learning “cannot meet the needs of the disenfranchised”.

“One must consider student and teacher expectations, the cultural, social and economic demands of a particular country or region and, perhaps most importantly, whether the infrastructure is there to support any technology at all.

“How can higher education reach the needy, whether they live in poor rural communities or refugee camps, while at the same generate tuition revenue to meet financial targets?”