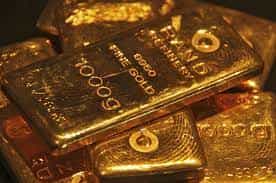 Buyers are continuing to buy now as gold will reach further up if the Russia-Ukraine war turns further serious and the inflation continues upwards, coupled with recession, the official said. “The price of 24 carat gold is expected to touch Rs 60,000/10 grams in couple of days. On Monday, the price was Rs 58,550/24 carat 10 grams including taxes,” Madras Jewellers and Diamond Merchants Association President and Challani Jewellery Mart partner Jayantilal Challani told IANS.

According to Emkay Global Financial Services, the recession fear in the West and the geo-political tensions will keep gold in focus. “Gold has been trading in a range of $1,800-1,880 in the last one month. The cues from the US Fed on likely slowdown in rate tightening has helped gold prices rally from levels of $1,680-1,730 to $1,850-1,880 currently,” Emkay Global said.

“In India, the prices are trading near an all-time high aided by the marriage season demand. Globally, it is trading 5-6 per cent lower than the all-time high level recorded in September 2022,” the company said.

According to Emkay Global, a major reason for the rally in the prices of gold has been the cues from the US Fed. After a relentless tightening on the rate as well as liquidity front, the central bank has indicated a slowdown in the pace of rate hikes as key economic indicators, and inflation has stabilised.

A slower rate hike of 25 bps going forward has softened the US dollar, leading to a rally in gold prices. Gold is an international commodity, priced in US dollars – so a softness in the greenback lifts the prices of the yellow metal. The US dollar index, from its high of 114 level witnessed in September, has softened to 103 levels.

Gold is considered a safe haven and often attracts investments in times of uncertainty and slowdown, recession in the economy. In addition, institutional buyers like the cCentral banks bought a net 50 ton of gold in November, up 47 per cent month-on-month, Emkay Global said.

“This led to a rise in demand for the yellow metal, perhaps this offset the selling by ETFs. A consistent rise in yields and expectations of Fed rate hikes will keep gold prices in focus. Policy changes, if any, will be at least two quarters away given the persistence of inflation as also target levels being quite far away from the current inflation reading. Gold is poised to move up with the right indications in interest rates, especially US rates,” Emkay Global added.