Figures from The Office for National Statistics found that net migration was at 504,000 this summer, with international students, along with people arriving for humanitarian protections and family reasons, being a key driver of the growth.

The prime minister’s spokesman told reporters on November 24 that the government will consider “all options to make sure the immigration system is delivering”, which includes “looking at the issue of student dependents and low-quality degrees”.

“The prime minister has said he wants net migration to reduce, he has not put a specific time frame on that,” they added. 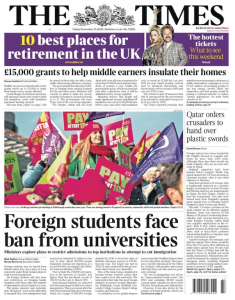 UUK said that like for like comparisons between years “should be treated with caution as these statistics cannot account for changes in travel patterns following the pandemic”.

The ONS stated that students arriving after studying remotely during the coronavirus pandemic could have pushed the numbers up this year, and that it is “too early to say whether this trend will continue”.

The home secretary, Suella Braverman, prior to quitting her job under former prime minister Liz Truss before being reinstated by her successor Rishi Sunak, had previously claimed that “poor universities [were] being bankrolled” by international students.

“We have too many students who are coming into this country who are propping up, frankly, substandard courses in inadequate institutions,” she said in early October.

The previous PM, Liz Truss who stepped down after 45 days in the role, had also planned an immigration system shakeup, with a review of the number of dependents arriving with international students.

On Thursday, Braverman said that the public “rightfully expect us to control our borders and we remain committed to reducing migration over time in line with our manifesto commitment”.

The 2019 election manifesto – in place when the Conservative Party was last elected to lead the UK – promised to introduce an “Australian style points-based system”, which it revealed in February 2022. However, unlike the 2010 election manifesto, the 2019 document does not mention the words ‘net migration’, but it does say that with fewer “lower-skilled” migrants arriving, overall numbers will come down.

It did also highlight that “our student visa will help universities attract talented young people and allow those students to stay on to apply for work here after they graduate”, referring to the graduate route. 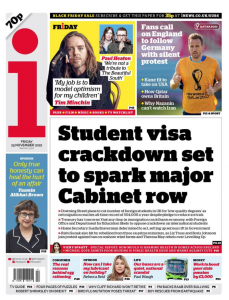 “This level of migration has put pressure on accommodation and housing supply, health, education and other public services,” Braverman added this week. 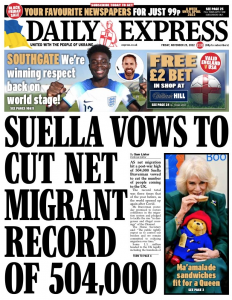 The inclusion of international students in net migration targets in the UK had been heavily criticised by sector stakeholders under Theresa May’s administration. Calls to exclude students from any net migration reduction targets extend back more than a decade.