The scale of UK higher education transnational education report, from Universities UK International and the British Council, found that in the 2020/21 academic year 510,835 students in 228 countries and territories studied via UK TNE.

Researchers noted the 12.7% increase from the previous year meant UK TNE numbers have grown across all regions at an “overall higher growth rate than ever before”.

The 162 UK higher education providers indicating students were studying via TNE was also “the highest figure to date”, up from 156 in the previous year.

“Transnational education enables cultural exchange and diversity for students and staff and contributes significantly to the UK’s economy, so it is great to see the strong demand for UK TNE across the world,” said Joana Westphal, head of TNE at UUKi.

“This reflects not only the quality and strength of the UK’s offer but also the hard work and dedication of colleagues who adapted TNE partnerships and models during the Covid-19 pandemic.” 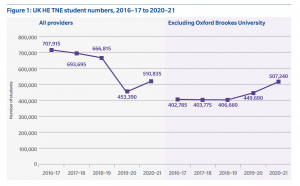 The research noted that the Covid-19 pandemic “does not seem to have had a significant impact on the split of types of UK TNE provision”, but indicated the modes of TNE activityAsia maintains its position as top host region, with 252,845 students representing 49.5% of the total driving numbers.

Distance, flexible or distributed learning saw a 29.1% rise in students to 34,070, and students at overseas partner organisation increased by 8.1%, equivalent to 8,680 students.

The sixth iteration of the report also identified regions of the world where the TNE students are located.

Asia maintains its position as top host region, with 252,845 students representing 49.5% of the total.

In the top 20 countries and territories, only three countries saw growth decline. Malaysia fell by 1.9%, Oman by 11.8%, Cyprus (EU) by 12.1%, while student numbers in Singapore remained stable.

Westphal however warned that TNE partnerships “do not exist in a vacuum and can be heavily affected by political developments”.

“It is therefore crucial that the sector and UK government work closely together to continue to mitigate risks in TNE and ensure that partnerships can continue delivering for students around the world,” she warned.